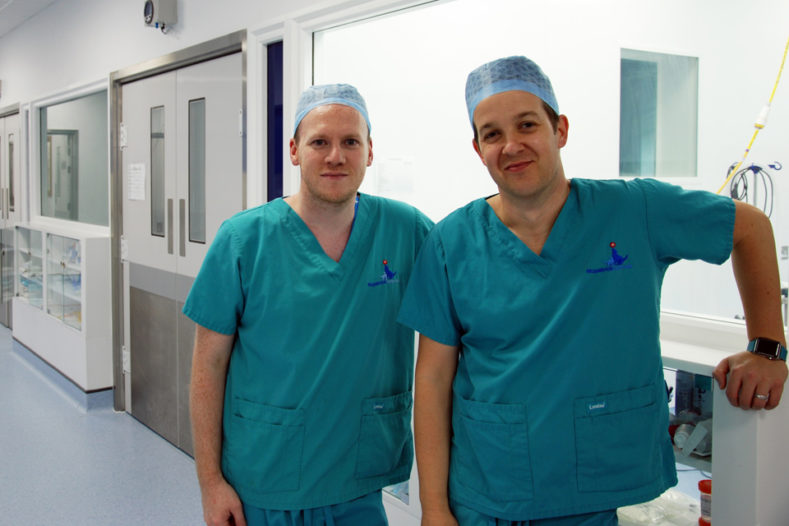 Q. Alex, what are the most common illnesses/conditions you treat in humans?

Q. How did the opportunity to work with Fitzpatrick Referrals come about?

Alex: I was aware that Fitzpatrick Referrals were putting something here – having spoken to my brother (Dr Dan Horton, Senior lecturer at Surrey University and Veterinary Virologist). With the One Health concept and the development of the vet school at Surrey, I thought it would be a good opportunity to see if we could collaborate…I always thought there were things in interventional radiology that I could potentially offer as far as techniques that might not already be being explored. I had a colleague when I was a trainee, who used to go on his half day to London Zoo and report all the X-rays on the gorillas, so it always struck me as being something a little bit different that I fancied.

Gerard: When I completed my IR Fellowship training at the Animal Medical Centre in New York I worked closely with medics and so I know about the benefit of collaborating with colleagues in human medicine. Alex’s brother being a veterinary surgeon was a brilliant coincidence and opened the door for initial conversations about us working together. He has been an amazing support and mentor for me over the past 18 months. He probably won’t admit it but I think he also loves coming over to cuddle all the patients and talk about his own little puppy called Biggi!

Q. What are the benefits of working together, from both a human medicine and veterinary medicine perspective?

Alex: I think there’s a lot of stuff that we can pool together. It’s very interesting on the academic side just talking about differences in the way we interpret blood results and basic tests, and the way we treat things differently. We have a lot of ‘would you do this or would you do that?’ Obviously the anatomy is significantly different but actually, there are also a lot of similarities, so I suppose in that respect we are both learning.

Gerard: Alex has a huge amount of experience that he is able to bring to the table. The veterinary IR field is in its complete infancy compared to the human specialty. With IR I always say it’s about thinking outside the box and not accepting that techniques and outcomes cannot be improved, I really feel that working together can help us both develop in this respect. 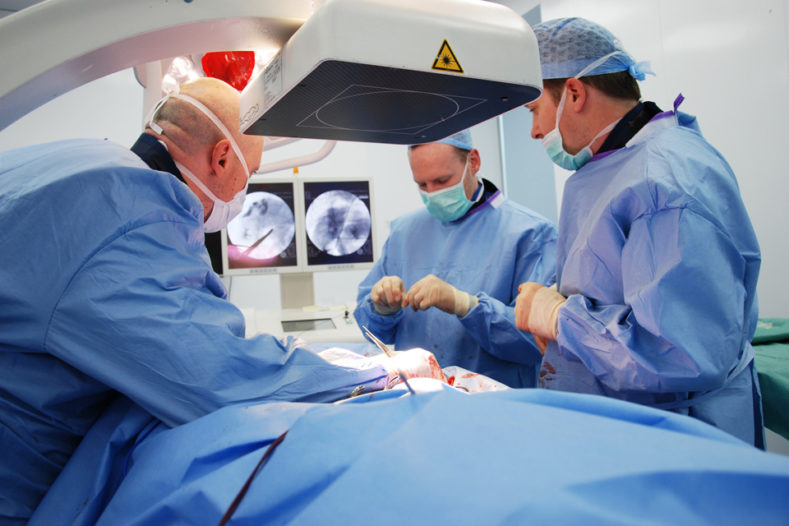 Q. Alex, do you see any similarities in the cases you see with humans, with animal patients here at Fitzpatrick Referrals?

Yes, because a lot of the cases I’m asked to be involved in tend to be cancer-related so there tend to be similarities with the tumour treatment particularly with chemo-embolisation. Other procedures such as unblocking kidneys with nephrostomy tubes are common to all mammals so there are also similarities there. Additionally, there are some cases more peculiar to animals, such as large shunts within the liver, and treating these has been informative for both of us.

Q. What types of conditions and procedures have you worked on together?

Alex: The relationship started over a stent in the penis of a Rottweiler! The poor dog had a stricture (narrowing) in his penile urethra meaning he had been unable to pass urine for months. This was benign but significantly affected his quality of life. Gerard asked me if I had any suggestions or techniques that we could translate across and with a little thinking outside the box we achieved an excellent result.

We’ve done some unblocking of kidneys/bladders that were obstructed by cancer or stones, we commonly treat congenital liver abnormalities (portosystemic shunts and arteriovenous malformations) and have delivered intra-arterial chemotherapy to multiple cancers that are not amenable to surgery including those affecting the lung, prostate, bladder and liver. In interventional radiology, you often are left to try things that are more innovative. We’ve done that in several patients and seen some excellent results. 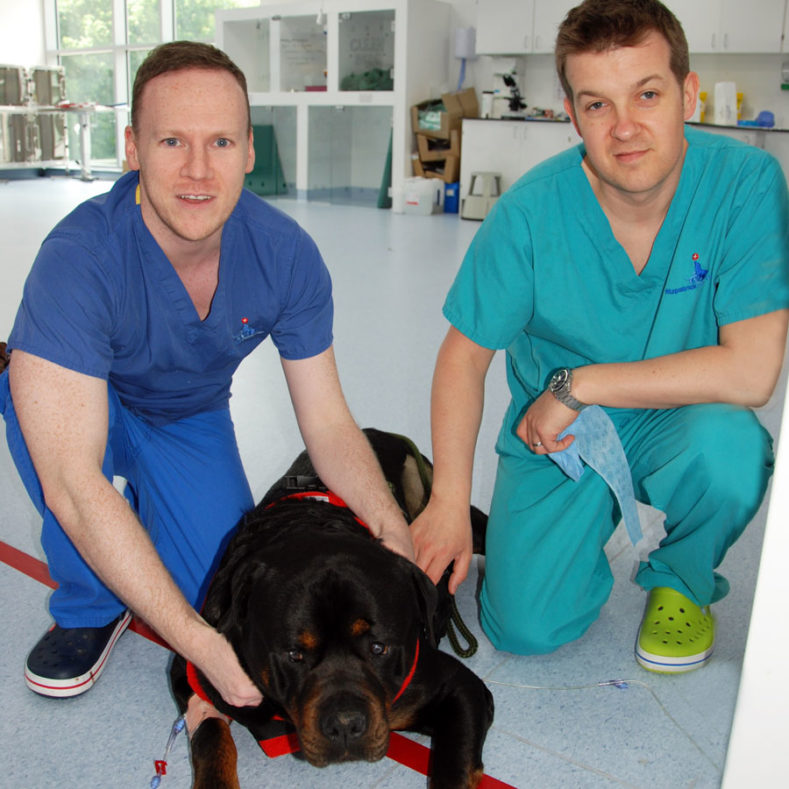 Gerard McLauchlan and Alex Horton prior to surgery with Rotweiller Tatu.

Gerard: Alex and I primarily work on cancer patients and are hoping to develop further the treatment of prostatic cancer in particular. We also commonly see a very large urinary case-load (as he says our relationship was forged over a Rottweiler’s penis!) as well as complicated vascular cases such as congenital liver shunts in young dogs – traditional surgery for these cases is associated with up to 30% mortality rates so an IR approach is really now regarded as the gold standard treatment.

The veterinary IR field is in its complete infancy compared to the human specialty. With IR I always say it’s about thinking outside the box and not accepting that techniques and outcomes cannot be improved, I really feel that working together can help us both develop in this respect.

Q. Can you tell us about a case you recently performed surgery on together?

Teddy was anaesthetised and had a contrast CT scan of his liver performed to highlight the abnormal blood vessels. After this Alex and I placed a stent in his caudal vena cava using fluoroscopic guidance – the stent spanned the opening of both of the shunts. After this multiple platinum coils were deployed into both shunts in order to occlude the vascular flow through the abnormal vessels into the cava. The entire procedure took under two hours and was performed via a small 2cm incision in his neck so no exercise restrictions or wound monitoring was required post operatively.

Teddy recovered really well (he was up, bouncing around and eating within a few hours!). He has made an excellent recovery at home and his clinical signs have completely resolved so it’s been an amazing outcome for him and his family.

Q. Alex, what do you enjoy about assisting in veterinary interventional radiology procedures?

It’s just a bit different. My brother’s a vet and he works at the university now. He introduced me to Nick Bacon a long time ago before this place [Fitzpatrick Referrals Oncology and Soft Tissue] got off the ground and we discussed then some collaborative things from a research point of view and I suppose it lead me to think that there are some things we can do together. There are obviously some conditions in animals that are specific to breeds so it’s quite easy to get a large concentration of a certain disease population for the purposes of research and getting data, so that’s quite appealing.

Also, it ties into the whole ‘One Health’ model about the common stuff that we have together. I like doing different things and I like challenges, so if somebody says to me ‘can you help?’ I can’t resist trying if it’s in my skillset. The first time I came here, soon after Gerard had started and he reached out because he needed help to do something which was a bit off book and I said ‘well I’m not sure, I’ve never done that but I’ll see what I can find, got some equipment, came over and we got something together – so that sort of “MacGyver” side of things is quite nice particularly when it affords patients a solution that would otherwise not be possible. It’s a great place to work as well – everyone’s very friendly, nice and welcoming. 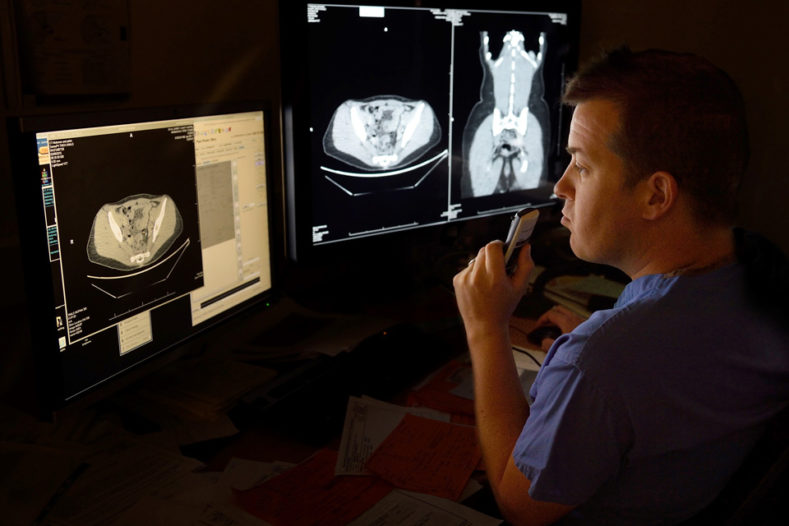 Q. Gerard, it’s been over 18 months now since Fitzpatrick Referrals Interventional Radiology service launched. Can you tell us about some cases which have been a particular highlight?

One of the first cases I consulted on was a dog called Rags. He had a stricture of his urethra meaning he had not been able to urinate normally in almost six years. His mum was draining his urine via a catheter that was in his bladder every eight hours and hadn’t been able to leave him to even go on holiday for years.

We were able to place a stent in his urethra and he was discharged the same day urinating normally. It was amazing to be able to make such a life-changing difference to Rags and his mum Judy.

Another patient was Charlie Cocker who came to us suffering from an aggressive prostate cancer. We treated his tumour with targeted intra-arterial chemotherapy and 18 months later Charlie is still enjoying an excellent quality of life which is an amazing outcome for this kind of tumour. 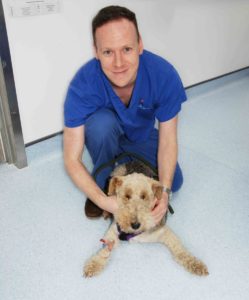 I work extensively with our oncology service and have been developing the use of selective intra-arterial chemotherapy and embolisation techniques for various tumours that is incredibly exciting. We have seen some amazing results in various cancers including prostatic carcinoma, urinary tract transitional cell carcinoma and nonresectable liver and lung cancer.

Q. Gerard, how does your other specialty of internal medicine assist with interventional radiology cases?

My background in medicine is incredibly important. As the only medicine specialist at Fitzpatrick Referrals, I feel I am able to offer a massive support to my colleagues in other disciplines. Many of our patients have concurrent problems such as anaemia, pneumonia, vomiting etc. that all require medical input so I am certainly kept busy every day but I wouldn’t have it any other way! 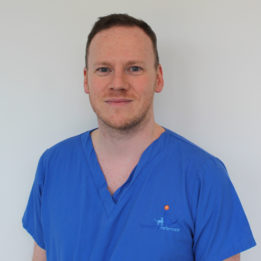