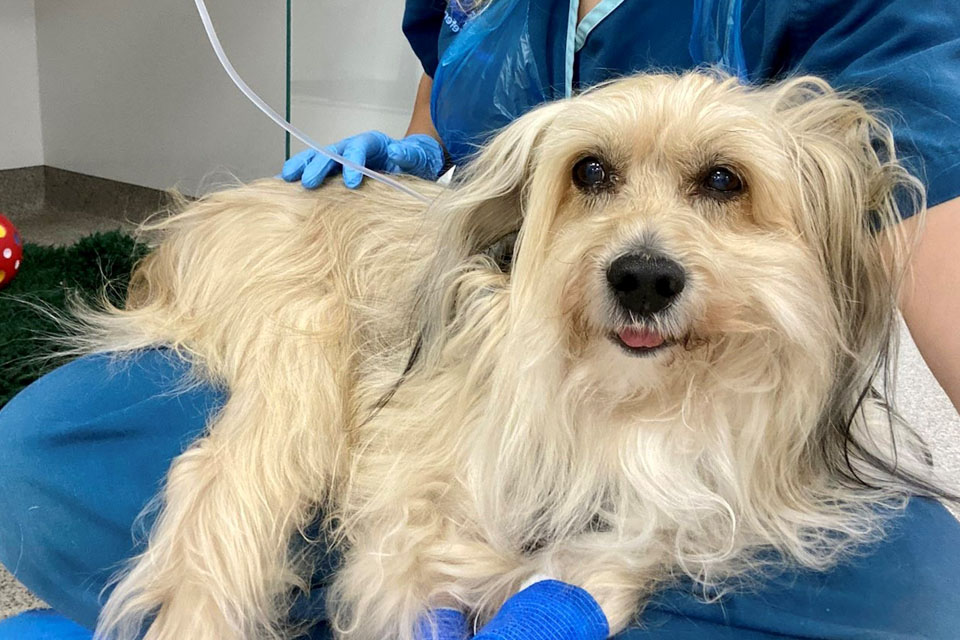 13-year-old Chinese Crested dog Alfie being comforted by a veterinary nurse in the wards after he had a melanoma removed from his foot.

Meet Alfie, a 13-year-old Chinese Crested dog who was recently referred to our oncology and soft tissue hospital for the removal of a melanoma from his paw pad.

About 15 months ago, Alfie’s family noticed a pink growth about the size of a pea under his paw. It didn’t seem to be causing him any trouble but as time went on the mass gradually grew bigger and became ulcerated. Alfie began licking it and eventually in the last few weeks before his referral, he began to limp, not wanting to put any weight on the paw. So his primary care vet referred Alfie to our specialist oncology hospital in Guildford for further investigations and was booked in to see Senior Clinician Dr Jonathan Bray.

On the day of his appointment, Alfie was admitted for assessment and then Jonathan discussed a plan with his mum over the phone.

Initial investigations included taking a biopsy of the mass and performing a CT scan to stage the progress of the cancer through the body. Under anaesthetic, a tiny piece of the mass was removed, to be sent to the lab for analysis. Alfie then underwent a CT scan to obtain internal images and to determine which lymph nodes were communicating with the mass. Once this had been determined, a very fine needle was inserted into the relevant lymph node to aspirate samples of the cells, which were also sent to the laboratory.

Within a couple of days, both sets of results returned from the laboratory and the mass was confirmed to be a melanoma. The fine needle aspirates taken from the lymph node showed there was the possibility that the melanoma had begun to metastasize (spread), so it was important that surgery included removal of that lymph node as well as of the mass itself. 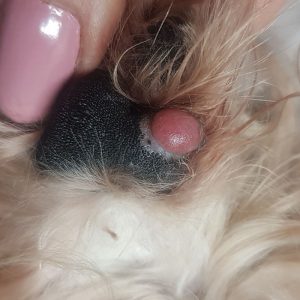 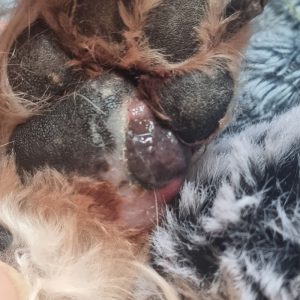 Alfie’s paw melanoma just prior to his referral to our oncology hospital. 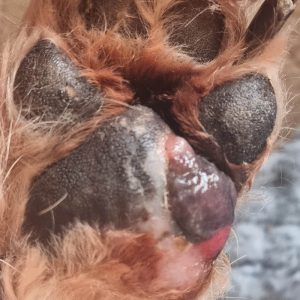 Alfie’s paw melanoma just prior to his referral to our oncology hospital.

Two weeks after his first visit, Alfie returned to our hospital for his surgical procedure. After saying goodbye to his family, he was admitted and prepared for surgery.

Assisted by Surgical Resident Dr Bertie Phipps, Dr Jonathan Bray began the delicate procedure of removing the mass from under his paw. The resulting wound on Alfie’s paw needed reconstruction and this was performed by using the skin and pad from the 5th digit, which required amputation of the toe. His lymph node was also removed, through a separate, small incision.

The surgery went smoothly and after two nights with us, where he enjoyed lots of fuss and attention from his nurses, Alfie was discharged to be reunited with his family. 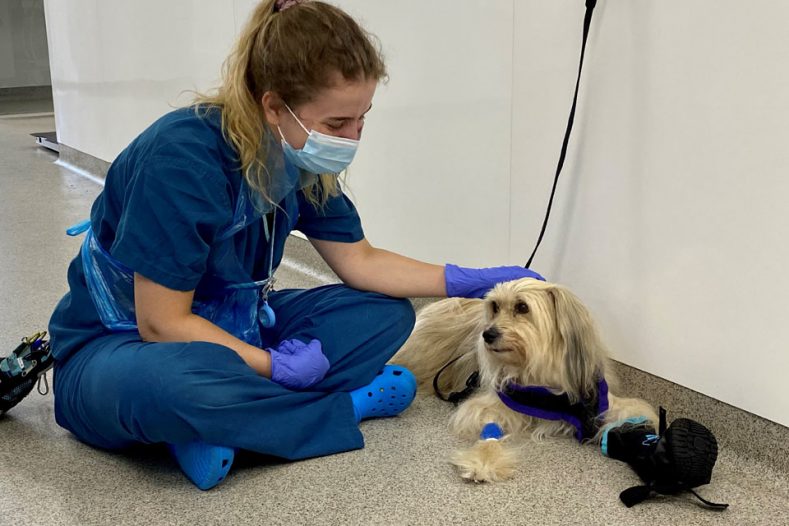 13-year-old Chinese Crested dog Alfie being comforted by a veterinary nurse in the wards after he had a melanoma removed from his foot.

He will need to have his bandage changed every few days, which he can have done at his local vets. The mass and the lymph node have been sent off for further testing and in a few weeks’ time, the pending results will determine the course of his treatment going forward.

We wish Alfie a speedy and comfortable recovery!