Plato is an affectionate and loved nine-year-old male neutered Pug who was presented to Fitzpatrick Referrals for management of a subcutaneous mast cell tumour (MCT) on his left flank.

The family noted this 2.5cm soft and well-defined mass about four weeks prior to referral, and it had been very stable in size and appearance since.

Only 4% of subcutaneous MCTs have originally been reported to metastasise but this may be underestimated, as in our experience the incidence of metastasis is higher when a thorough lymph node (LN) assessment (of the appropriate lymph node) is performed. 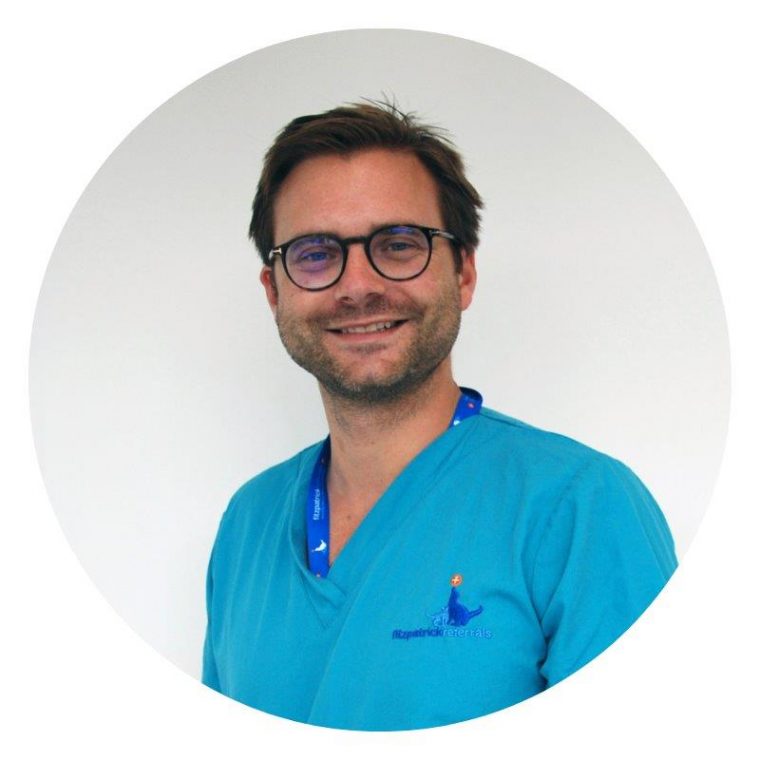 Following the recommendations of Senior Clinician in Medical Oncology, Quentin Fournier, a contrast-enhanced ultrasound sentinel LN mapping was performed to identify precisely which LN(s) were draining his tumour.

Anatomically, either the left medial iliac or left inguinal LNs could be potentially draining the MCT, but this is difficult or impossible to predict in advance (Figure 1). Identifying the correct draining lymph node however helps the owners and the oncology team make decisions based on the most accurate information on Plato’s specific situation, namely individualised cancer care. 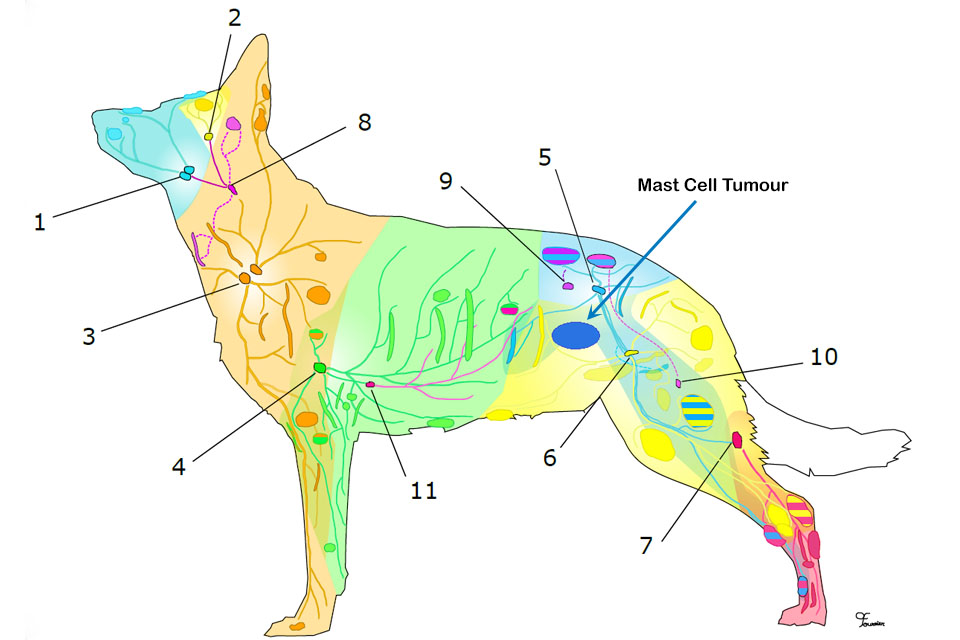 Around the nodule, we injected a contrast agent consisting of a liquid containing microscopic bubbles of gas, harmless and eliminated from the tissues within minutes). Special advanced ultrasound allowed our radiologist to visualise the contrast real-time travelling in the lymphatics and first accumulating in the left inguinal LN (in the groin), and after a few minutes also in the left medial iliac LN (inside the abdomen). The left inguinal LN was moderately enlarged (7mm) with a second small 2.5mm one, whilst the left medial iliac LN was within normal limits and too small to be sampled (Figure 2). 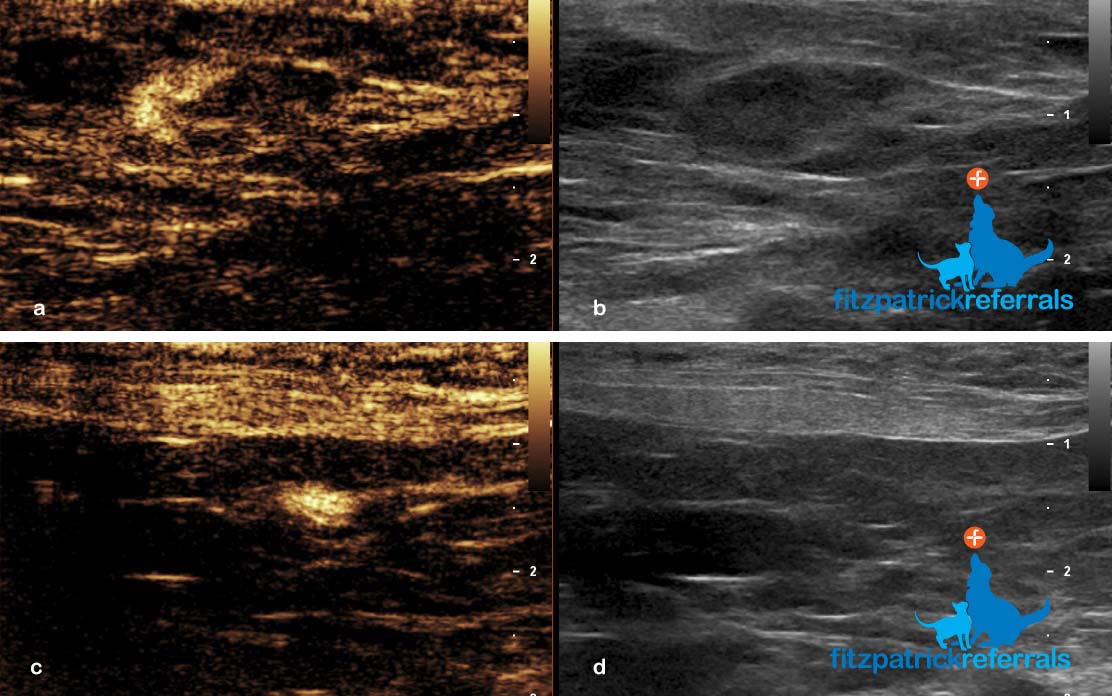 Figure 2. Left inguinal (a.,b) and medial iliac (c., d.) lymph nodes seen on normal ultrasound (b., d.), and seen on a specific contrast mode revealing the uptake of contrast (a., c.). The contrast was injected around the primary tumour, and travelled through lymphatics before accumulating into the two draining lymph nodes. The left inguinal lymph node has a heterogeneous pattern (a., overt metastasis), whilst the left medial iliac lymph node has a more homogeneous pattern (c., overt metastasis).

A fine-needle aspirate of the left inguinal lymph node unfortunately confirmed it was metastatic, but the liver and spleen were free of mast cells.

A week later, the subcutaneous MCT was removed at surgery with wide margins. Initially hesitant to remove the left medial iliac LN as it was a normal size and within the abdomen, given we could directly follow the microbubbles from the tumour to the internal node, the owner elected to remove it under the same anaesthetic, rather than perhaps need a second surgery in the future. 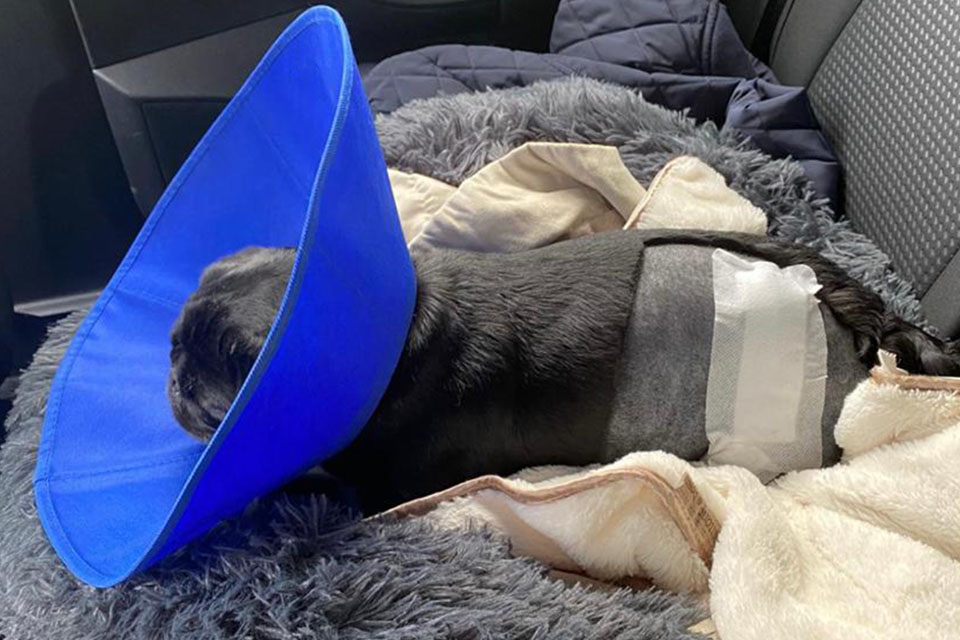 Plato recovered well from his procedure. Histological analysis confirmed his MCT to be completely excised but all lymph nodes removed showed evidence of early metastasis. Based on the current scientific data, only 3% of subcutaneous MCTs with a benign appearance and low proliferation index metastasise but with new techniques we are learning the risk is likely higher, and we are very happy that Plato’s owners followed our recommendations and all affected lymph nodes were removed with one procedure. Several publications suggest that removing a metastatic LN likely carries a therapeutic benefit, so we remain optimistic for Plato’s future. Given the early signs of spread, Plato underwent a 3-month course of vinblastine/prednisolone chemotherapy protocol, to reduce the risk of relapse. Plato remains cancer-free a year after his diagnosis, has needed no further surgery, and we wish him a long and happy life!

Contrast-enhanced ultrasound sentinel lymph node mapping is only available in a few places in Europe, and it allowed us to accurately identify the draining lymph nodes, even when internally, and remove the metastatic LNs in a single procedure. This would likely not have been possible otherwise, and cancer spread would have been left behind. This is a very good illustration of the medical oncologists, radiologists and surgical oncologists at Fitzpatrick Referrals Oncology and Soft Tissue, adapting state-of-the-art human techniques in cancer care to offer the best possible management and outcome for animals.