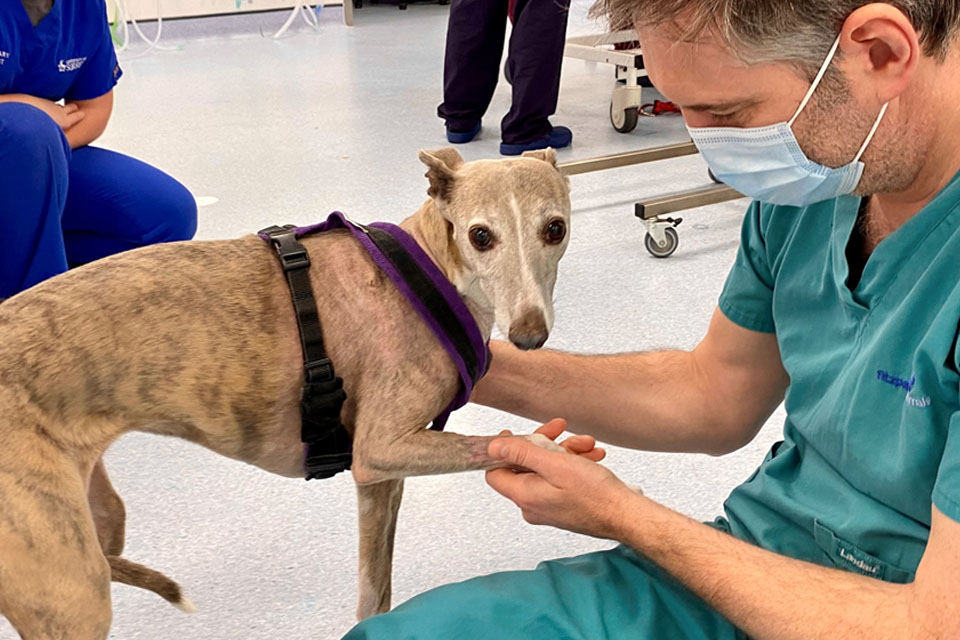 Maisy, a 10-year-old Whippet, recently returned to our oncology hospital to monitor the progress of her skin graft following successful surgery to remove a soft tissue sarcoma from her front leg.

A couple of months previously, Maisy’s mum noticed a small soft lump on Maisy’s right foreleg. It was not bleeding and did not appear to be causing any pain, but when it had not disappeared after a couple of weeks, she decided to take her to their family vet to have it assessed.

The vet sampled the mass by inserting a very fine needle into the tissue to collect some cells and placed them onto a glass slide which was then sent off for analysis.

A few days later the results returned and Maisy’s mum was devastated to hear that the lump was malignant – specifically, a cancer called a soft tissue sarcoma. The vet offered to refer her to a specialist to find out what could be done and she asked to be referred to our oncology and soft tissue hospital in Guildford. 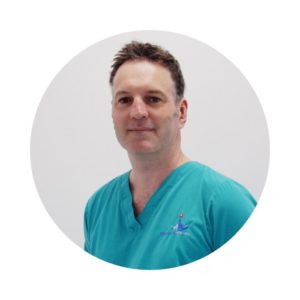 Maisy had an appointment scheduled with Professor Nick Bacon and her mum was anxious to hear what the next steps were, and what treatment options existed.

After initially fearing the worst, she was extremely relieved to hear from Professor Bacon that the mass could be removed surgically. The difficulty arose however in closing the resulting wound, as the lump was sitting over a skinny forearm of a Whippet, so once it was removed there was little surrounding skin to help close the defect.

A skin graft was suggested i.e. a piece of Maisy’s own skin from elsewhere on the body could be ‘harvested’ and moved to the defect on the leg. One advantage is that the body would not reject her own skin as foreign, the graft could be moved from an area where there was lots of spare skin, and if the worst happened and it did not survive, it could be repeated using a new piece of skin.

Professor Bacon advised a CT scan prior to surgery, to determine the extent to which the cancer had invaded the underlying muscles in the leg, and also whether it had spread to other areas of her body (metastasis). Maisy’s family then went home to consider all the options she had been given and make a decision.

Maisie’s mum, however, knew her answer before she had even made it back to the car, and that they wanted to go ahead with the procedure to remove the cancer and heal the wound with a skin graft. Arrangements were made for a future date when Maisy would return for the CT scan and surgery.

On Christmas Eve, Maisy returned to the hospital for her planned treatment. The CT scan was performed under general anaesthesia so that sharp accurate images could be obtained without any movement blur. The results of the CT scan were excellent and confirmed that there was no evidence that the cancer was invading deep into the muscles, or that it had spread elsewhere in her body.

The next step was the surgery to remove the sarcoma from her leg. To ensure the entire tumour was completely removed, a wide strip of skin surrounding the cancer, and the underlying tissue the mass was sitting on needed to be removed.

As expected, there was insufficient skin to close the wound, so the surgical site was deliberately left open, leaving behind exposed tissue and tendons protected by bandages.

Maisy’s wound was monitored closely, every few days, until the body had regenerated enough healthy tissue in the defect to be able to support the graft. 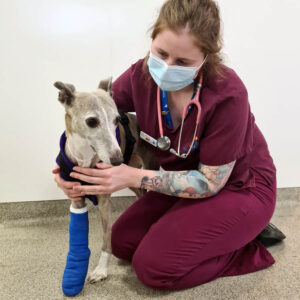 After spending Christmas Day with us and being spoilt by the vets and nurses working that day, Maisy went home but returned to the hospital for three bandage changes over a period of 11 days, by which time the graft bed was healthy and ready for the grafting procedure.

Under a short anaesthetic, a piece of skin matching the size of the leg defect was taken from over her shoulder. All underlying fat and tissue were removed from the graft, leaving a paper-thin sheet of tissue. Tiny stab incisions were made all over the graft to help it better conform to the slightly uneven wound surface, prevent any fluid from getting trapped beneath the graft, and increase the surface area to make sure it easily covered the defect.

The skin graft was sutured in place and covered in bandages. The graft was left untouched for 72 hours to let it bed down and then dressings were changed a couple more times every 3-4 days. The graft had taken well, there was no infection and no signs of graft failure. At 14 days after surgery, the team was able to remove all the stitches as the skin graft had now successfully fully incorporated onto the site with no complications. 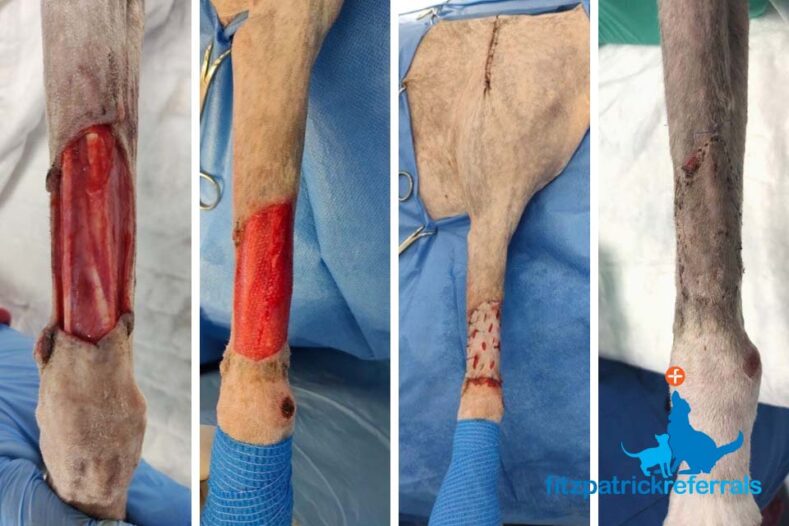 Images left to right: 1. The wound on the forearm three days after the cancer was removed with the open wound beginning to heal, in preparation of receiving a skin graft. 2. Day 10 after surgery, with healthy tissue now filling the defect making an excellent wound bed for a skin graft. 3. A piece of skin has been taken from the shoulder area where there is surplus, the skin prepared, and moved to the open wound as a graft. The open holes to allow the underlying wound to drain. 4. The graft two weeks after placement, at time of suture removal. The open holes have closed and the graft is fully healed. Fur will regrow in the area over time.

The best news was yet to come as the lab results from the tumour returned showing it was low grade and had been completely removed, which should mean a cure for Maisy. 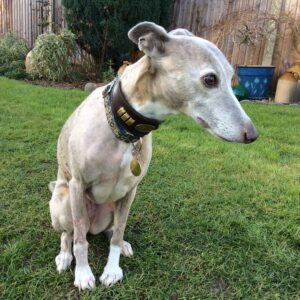 She has been doing very well at home, and no further visits are necessary.

Read more about our oncology and soft tissue service