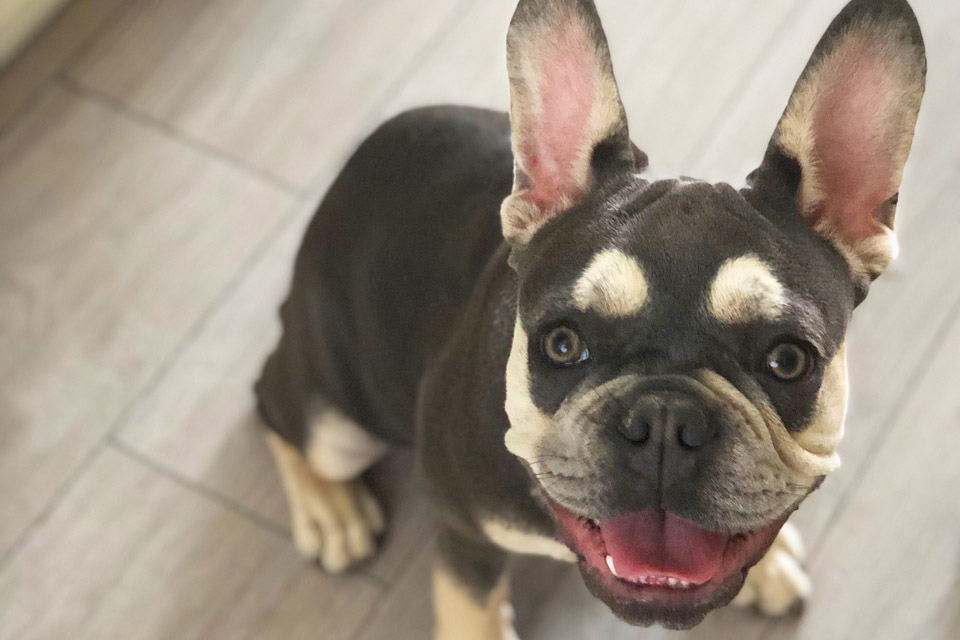 Precious Pablo is a nine-month-old French Bulldog who visited our oncology and soft tissue hospital this week after his family noticed he was experiencing some breathing difficulties, which is sadly not unusual for this breed. French Bulldogs like Pablo fall into the brachycephalic breeds category, also known as flat-faced dogs.

The term “Brachycephalic Obstructive Airway Syndrome” (BOAS) refers to a group of conditions resulting from the body conformation of dogs with short noses (brachycephalic dogs). Common breeds of brachycephalic dogs include English and French Bulldogs, Pugs, Shih-Tzus and Pekingese. Other breeds with longer noses, such as Cavalier King Charles Spaniels and Staffordshire Bull Terriers, can also be affected, although less commonly.

Their nasal cavities are compacted in a small and short nose, making them very tortuous, which increases the resistance to airflow through them. The end of their palate, called “soft palate”, is too long and thick for their flat face, which makes it obstruct the back of their throat, leading at best to loud “snoring” noises when they breathe, at worse to complete respiratory obstruction.

Pablo’s family had noticed that sometimes he was struggling to catch his breath and that he would also wake himself up when sleeping. Surgical Resident Diogo Miraldo discussed the surgical option available and together Pablo’s family and Diogo agreed that it was the best course of action for Pablo.

Pablo returned to the hospital two weeks later for his surgery, everything went well and he recovered well with his family at his side. 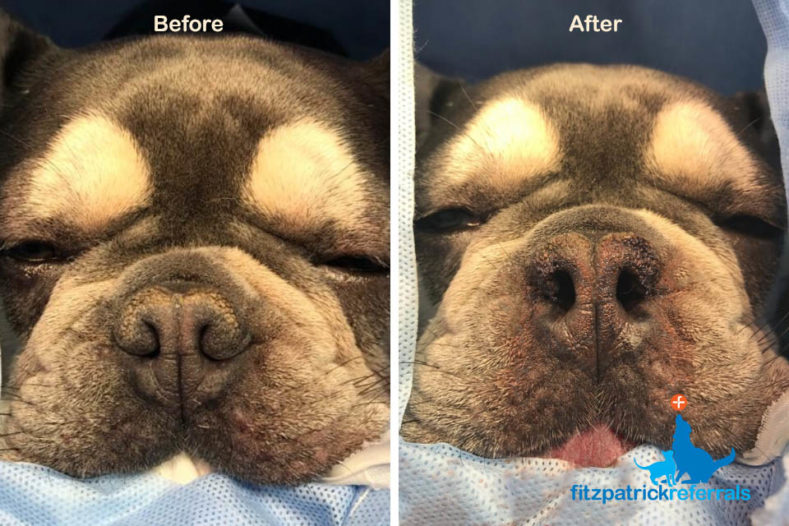 It is not uncommon for our BOAS patients to recover with their families present. Flat-faced breeds can have complications when waking from procedures with an anaesthetic, due to their breathing difficulties and they can become easily stressed and gasp for air. The team at Fitzpatrick Referrals have found that by recovering these patients with their family present, that they are more relaxed and in most cases are then able to return home the same day.

Pablo went home the same day as his procedure and his family have reported that he is doing well.

He will return to us after Christmas for a recheck! In the meantime, Pablo will continue to recover at home and as you can see he is enjoying getting into the Christmas spirit!

In recent years Brachycephalic breeds have become more popular. Sadly, this can be detrimental largely due to repeated poor breeding of dogs with extremely flat faces. We support responsible breeding, which would see many breeds having fewer medical issues and therefore minimising the need for veterinary intervention. As veterinarians, we made an oath to treat all patients to the best of our abilities, with quality of life at the forefront of our minds throughout the treatment process.

It is therefore our belief that we have a duty to help any animal, so they too can live a pain-free and healthy life. We feel it is important when buying any breed that you educate yourself on the genetic and medical conditions your chosen breed may be predisposed to, so you can make an educated and informed decision.