Feline Orofacial Pain Syndrome is a disease characterised by face and tongue mutilation and other behavioural signs suggesting oral and facial discomfort (for example exaggerated licking and chewing movements).  The apparent discomfort and/or mutilation are disproportionate to any possible causes for the pain (for example teething). The disease is most likely a neuropathic pain disorder similar to trigeminal neuralgia in humans.

What type of cat is affected by FOPS and what are the clinical signs?

FOPS is characterised by face and tongue discomfort and affected cats are most commonly presented with exaggerated licking and chewing movements with pawing at the mouth also. More severe cases may mutilate their tongue and lips and in the most severe cases may even require surgery to repair tongue tears. Typically, the discomfort seems to be worse on one side. The apparent discomfort is often episodic and bouts of pain can be triggered by tongue movement for example during grooming, eating or drinking.  Bouts of pain can last between several minutes to several hours and are often preceded by a short period of behaviour suggesting anxiety. Some cats are in more continuous discomfort, are at greater risk of mutilation and may also be anorexic or unwilling to eat.  FOPS is most common in the Burmese cat, however the disease may be seen in any variety including Siamese, Tonkinese, Burmilla, and the domestic shorthair, it is thought FOPS is an inherited condition. Any age of cat can be affected however many affected cats will first show clinical signs when erupting permanent teeth i.e. teething. Oral lesions, especially dental disease, and environmental stress can precipitate the condition.

What is the cause of FOPS?

FOPS has similarities to trigeminal neuralgia in humans and is a neuropathic pain disorder i.e. pain due to abnormal nervous system processing of pain messages. The trigeminal nerve conveys sensory information, e.g. pain and touch around the face and mouth to the brain. It is suggested that affected cats have misfiring of this nerve.  In FOPS when the nerve fires, for example during teething or dental disease, it sends an inappropriately large message of pain.  Conditions of neuropathic pain can be greatly influenced by environmental factors (imagine if you have a headache – it can be made worse by stress). The most common environmental factor that can trigger FOPS is stressful interaction with other cats, for example house mates or neighbourhood cats invading the home and garden territory.  Visits, for example to shows, veterinary practices and catteries, can also be a trigger. 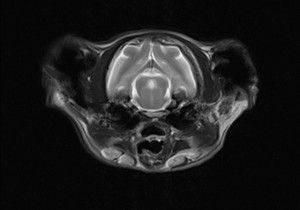 How is FOPS diagnosed?

There is no definite diagnostic test for this disease and the diagnosis is made on the basis of the characteristic clinical signs, elimination of other explanations and identification of contributing causes.

1. Ruling out other causes of facial and oral pain.

Factors to consider include;

How is FOPS treated?

The main aim of treating FOPS is to reduce the discomfort, limit the mutilation and identify and treat or prevent the underlying triggers

What is the prognosis of FOPS?

Classically FOPS is an episodic condition, at least initially. The first episode may be seen at teething and the second may not be until your cat develops periodontal disease later in life. After starting treatment the discomfort should lessen within 3 days and is usually absent or infrequent after 7 days of therapy. Attempts should be made to wean off medication after 4 weeks especially if the predisposing causes have been treated or have resolved. For immature cats erupting permanent teeth, the discomfort will resolve when the permanent dentition is fully erupted. Seek veterinary advice before withdrawing any medication – sudden discontinuation of phenobarbital can cause withdrawal seizures.

Unfortunately in a proportion of cats the signs of FOPS becomes continuous i.e. there is no remission and long term therapy is required. In addition, pain can be more difficult to treat and sometimes more than one drug is necessary to control the discomfort. Kittens which present with FOPS during teeth eruption are highly likely to re-present as older cats therefore prophylactic dental health care, maintaining oral health and preventing periodontal disease is advised. Environmental stress should also be limited. The numbers of cats within the household should be restricted to socially compatible levels and careful attention should be paid if further cats are to be introduced.

Can I breed my cat or its relatives?

FOPS is thought to be inherited and an autosomal recessive inheritance would fit with the limited data that is available. An autosomal recessive inheritance would mean that that both Tom and Queen of an affected cat either have or carry the condition. Because environmental factors such as dental disease and stress influence the disease not every cat with an affected genotype will necessary have clinical signs. In addition the signs of the disease might occur after the cat has been bred.  This makes it particularly difficult for a pedigree cat breeder to select disease free stock and it is hoped that ultimately the disease gene can be identified to enable easy screening. In the meantime breeders are advised not to breed any cat which has had signs of the disease even if the signs are not persistent. Breeding the Tom and Queen of affected cats is also not advised, especially the Tom as his genetic influence can be so far reaching.