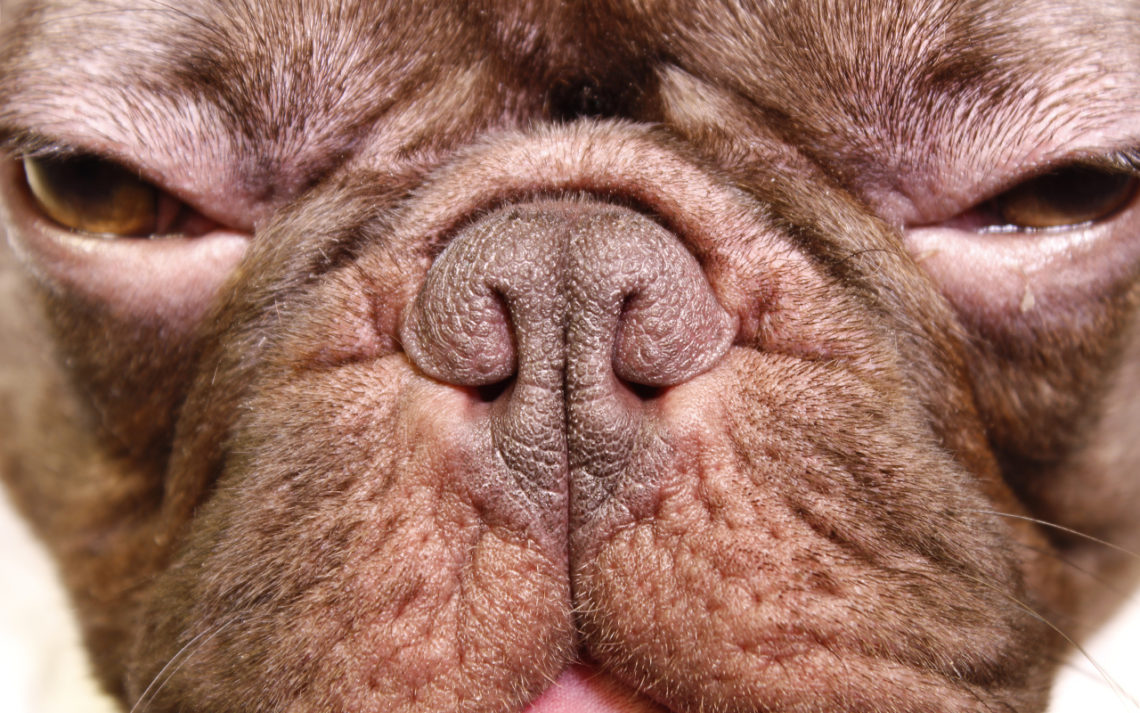 The term “Brachycephalic Obstructive Airway Syndrome” (BOAS) refers to a group of conditions resulting from the body conformation of dogs with short noses (brachycephalic dogs). Common breeds of brachycephalic dogs include English and French bulldogs, Pugs, Shih-Tzus and Pekingese. Other breeds with longer noses, such as Cavalier King Charles Spaniels and Staffordshire Bull Terriers, can also be affected, although less commonly.

Facial profile of a brachycephalic dog showing the extreme shortening of the nose.

Facial profile of a brachycephalic dog showing the extreme shortening of the nose.

Why are only certain breeds affected by Brachycephalic Syndrome?

Breeds with short noses have a compacted skeleton, causing a number of malformations, including in their nasal cavities and spine and their tails, but have normal amounts of skin and soft tissue. Their soft tissue is therefore excessive for their skeleton, explaining the amount of skin folds brachycephalic dogs have on their faces and bodies. Similar folds and excessive soft tissues are present inside the body, leading to a number of obstructions, including in their airway. Frequently, these skin folds in themselves will cause dermatological problems (skin fold disease), and occasionally need to be surgically resected.

Skin fold dermatitis is an English Bulldog: maceration causes irritation and infection of the skin in the depth of the folds

Skin fold dermatitis is an English Bulldog: maceration causes irritation and infection of the skin in the depth of the folds

The list of the abnormalities and conditions most commonly seen in brachycephalic dogs, can be explained by this characteristic conformation. Because their skeleton is short and small, their nares are compacted on their skull and are consequently closed (“stenotic” nares). Similarly, their nasal cavities are compacted in a small and short nose, making them very tortuous, which increases the resistance to airflow through them. The end of their palate, called “soft palate”, is too long and thick for their flat face, which makes it obstruct the back of their throat, leading at best to loud “snoring” noises when they breathe, at worse to complete respiratory obstruction.

Their tongue, which would be of appropriate size for a long face, is too big for their shortened head and obstruct the mouth and throat further. 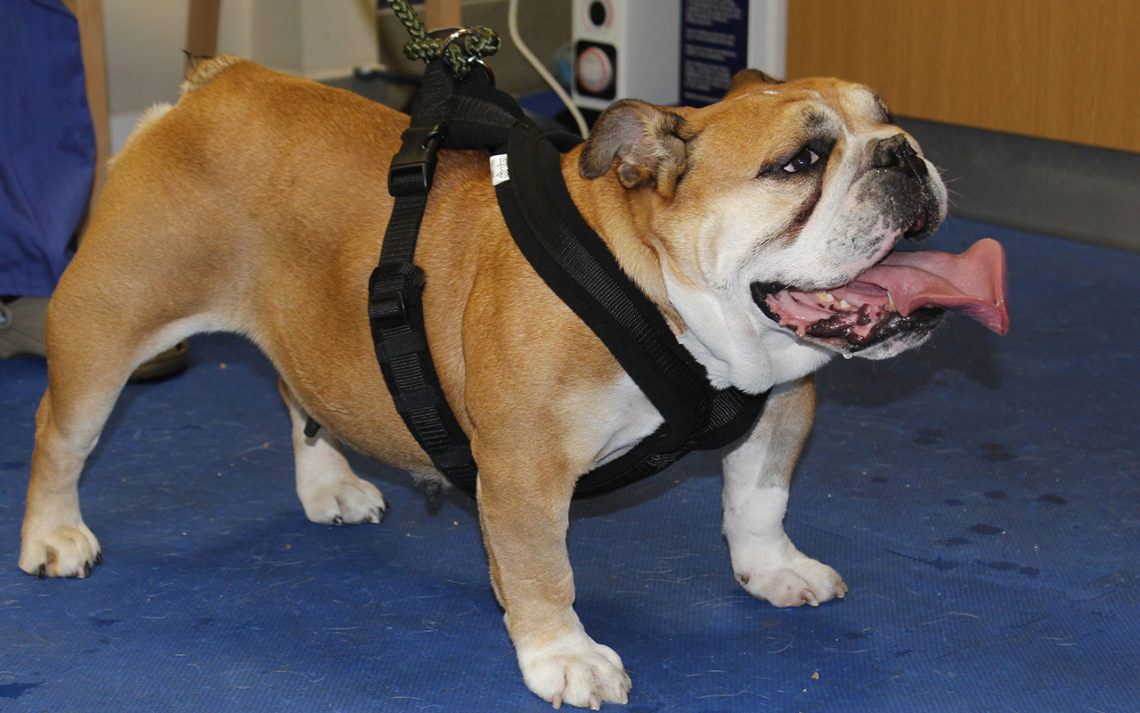 Brachycephalic dogs compensate their malformations by “pulling” harder when they breathe in, which creates strong negative pressures in their throat, neck and chest, which in turn eventually cause secondary respiratory and digestive diseases. This is one of the reasons why brachycephalic dogs frequently regurgitate or vomit. Nearly all dogs suffering from airway obstruction secondary to BOAS have oesophageal or gastric lesions on endoscopy, whether they show digestive clinical signs or not.

CT scans of a pug. The nasal cavities of the pug are extremely short, compressing its contents in a small volume, making the airways obstructed.

How can I tell if my dog suffers from Brachycephalic Syndrome?

All brachycephalic dogs suffer from BOAS to some degree. Some are more affected than others. The minimally affected ones can often live their entire life without showing much distress, at the cost of constant excessive efforts to open their throat and breathe. The more affected ones will show various degrees of respiratory distress or digestive troubles, ranging from being occasionally short of breath to collapsing on the moderate exercise.

BOAS impacts on all aspects of a brachycephalic dog’s life. Their sleep, for instance, is frequently of poor quality, similar to sleep apnea in humans: dogs tend to choke when they fall into sleep, which wakes them up until they snooze again and so on. Many brachycephalic dogs are consequently chronically sleep-deprived.

Typically, a brachycephalic dog suffering from BOAS shows a combination of signs such as loud breathing and snoring, intolerance to exercise or heat, collapse (“syncopes”), gagging, regurgitation and vomiting. Importantly, what is frequently perceived as being normal “for the breed” is already physiologically abnormal. Having difficulty and making a very strong noise breathing may be widespread among brachycephalic dogs, it does not make it normal or without negative health consequences for that!

If your dog is brachycephalic, you should seek a professional opinion to determine whether he or she would benefit from being treated for BOAS.

How is Brachycephalic Syndrome diagnosed?

The diagnosis of Brachycephalic Syndrome is primarily clinical, based on the combination of the clinical signs observed at home, the type of sounds the dog makes when breathing and the physical examination.

Further diagnostics may however be required to assess separately the different components of BOAS: examination of the throat under general anaesthesia is most commonly used to assess the soft palate, pharynx and larynx. A CT scan of the head can be used to study the conformation of the skull, with a particular interest in the nasal cavities and soft palate. Nasal cavities are occasionally evaluated by endoscopy (“rhinoscopy”). Lastly, x-rays or CT scan of the chest and abdomen can be required to investigate the presence of concurrent and secondary diseases such as aspiration pneumonia or hiatal hernia.
Other conditions also seen in breeds suffering from BOAS are vertebral deformities over the thoracolumbar spine which can cause compression of the spinal cord, leading to weakness in the back limbs (“paraparesis”) or even paralysis (“paraplegia”). Deformed (“cork-screw”) tails can also cause discomfort, either by poking into the perineum or by causing chronic skin fold disease.

How is Brachycephalic Syndrome treated?

As most of the problems included in BOAS result from upper airway obstruction, the main initial focus is unblocking the airways. This is most commonly achieved by surgically widening the nares and shortening the soft palate. In most instances, dogs having undergone surgery will be sufficiently and durably improved to never require any additional surgical treatments for their airways. However, a small subset of dogs will deteriorate further with time and require more treatments, especially of their larynx.

View of the nose of a French Bulldog before surgery

View of the nose of a French Bulldog after surgery

Several techniques are used to address the elongated soft palate. Historically, it was thought that the soft palate of brachycephalic dogs is not only too long but over the last decade, it has been repeatedly shown that it is also excessively thick, obstructing the back of the nose (“nasopharynx”). Classical techniques therefore only aim at trimming the soft palate, removing the excess blocking the entrance of the airways, but leaving the nasopharynx obstructed. Several news techniques have been designed to both shorten and thin the soft palate, improving all aspects of the obstructions it is causing.

CT scans of beagle (left) and of a pug (right). The soft palate is outlined in yellow. The red arrow indicates the airway passage at the back of the nose (“nasopharynx”), seen in black. It is hardly visible in the pug, being entirely obstructed by the soft palate.

CT scans of beagle (left) and of a pug (right). The soft palate is outlined in yellow. The red arrow indicates the airway passage at the back of the nose (“nasopharynx”), seen in black. It is hardly visible in the pug, being entirely obstructed by the soft palate.

Often, a medical treatment is prescribed for up to a month after surgery, especially in dogs showing digestive troubles before the operation. In most instances, the digestive signs resolve with the treatment and do not recur when the treatment is discontinued, as a result of the overall improvement provided by surgery.

What is the prognosis of Brachycephalic Syndrome?

The prognosis for Brachycephalic Syndrome is good overall. Naturally, it depends on the severity of the disease before surgery, with most severely affected dogs faring less well than minimally affected dogs.

The perioperative period is the most critical. Brachycephalic dogs are high-risk patients and recovery from anaesthesia is often delicate. In addition, during the first few days after surgery, the risk of aspiration pneumonia, which can have life-threatening consequences, is higher than usual.

About 95%-98% of dogs are improved by surgery. The worst the preoperative clinical signs, the most obvious the improvement. Virtually all brachycephalic dogs benefit from having their upper airways addressed. Even dogs not obviously affected after surgery require less effort to breathe, which improves their quality of life significantly. Most dogs have better exercise and heat tolerance after surgery compared to before. They also tend to snore less loudly, have less digestive issues and sleep better.

In recent years Brachycephalic breeds have become more popular. Sadly, this can be detrimental largely due to repeated poor breeding of dogs with extremely flat faces. We support responsible breeding, which would see many breeds having fewer medical issues and therefore minimising the need for veterinary intervention. As veterinarians, we made an oath to treat all patients to the best of our abilities, with quality of life at the forefront of our minds throughout the treatment process.

It is therefore our belief that we have a duty to help any animal, so they too can live a pain-free and healthy life. We feel it is important when buying any breed that you educate yourself on the genetic and medical conditions your chosen breed may be predisposed to, so you can make an educated and informed decision. 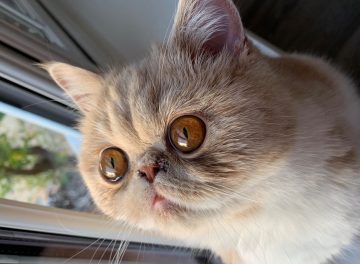 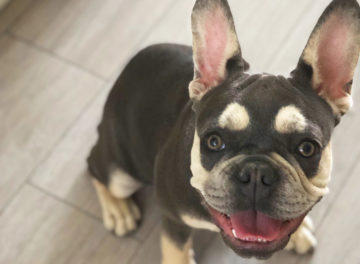