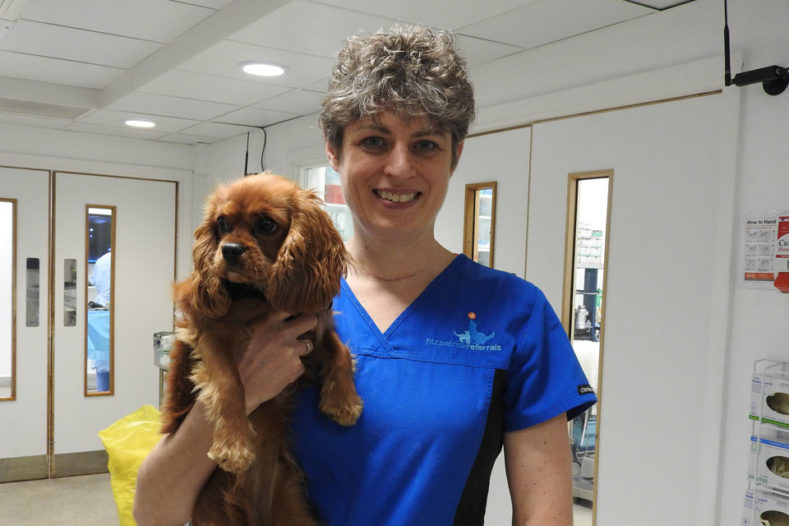 What is Chiari-like malformation and how does it cause pain and syringomyelia in predisposed brachycephalic toy breeds?

Chiari-like malformation (CM), is a complex skull and craniocervical junction disorder associated with brachycephaly. Stated simply – the skull is too small for the brain and there is also overcrowding of the spinal cord in the cranial cervical vertebrae.

Syringomyelia (SM) is a disease of the spinal cord characterised by fluid-filled cavities (syrinxes) within the spinal cord substance. Syringomyelia occurs secondary to obstruction of CSF pathways – the cerebrospinal fluid, in which the central nervous system floats, is important for protecting the nervous system from the systolic pulse pressure and increases nervous tissue compliance (i.e. ability to deform under pressure). There are many theories on how syringomyelia forms – a key feature in the pathogenesis is obstruction of the subarachnoid space which results in fluid similar to CSF accumulating in the spinal cord damaging the vulnerable nervous tissue. In dogs, syringomyelia is more commonly associated with craniocervical (headneck) junction abnormalities typical of Chiari-like malformation. It can also occur where there are adhesions between the outer layers of the meninges for example in Pug myelopathy (associated with spinal arachnoid diverticulum and/or caudal articular facet hypoplasia, for example).

Severe/symptomatic syringomyelia (SM-S) is the collection of signs of spinal cord disease (myelopathy) that occurs when the syrinx is wide. The signs depend on where the syrinx forms – for example, a dog with a syrinx in the neck may have phantom scratching and scoliosis whereas a dog with a wide syrinx in the lower cervical and upper thoracic spinal cord is more likely to have limb and spinal weakness. The most common signs of SM-S are phantom scratching, scoliosis, weakness and postural deficits.

CM-P is a difficult diagnosis because the clinical signs are nonspecific or can have alternative explanations but should be considered in predisposed breeds who may have signs such as: a history of vocalisation described as without obvious trigger (when shifting position during recumbency and when being lifted under the sternum to a height), spinal pain, head and ear rubbing or scratching, refusal or difficulty jumping or climbing stairs, exercise intolerance/reduced activity, sleep disruption, or behavioural change described as becoming more anxious, aggressive, or withdrawn. SM-S can be challenging because although the MRI identification of SM is generally unequivocal, SM can be asymptomatic or an incidental finding on magnetic resonance imaging. This is more likely if the syrinx is narrow and symmetrical and if the spinal cord is not expanded by the syrinx.

Diagnosis of CM-P and SM-S

MRI is undoubtedly the modality of choice to investigate CM and/ or SM. On making a diagnosis of CM/ SM there are key aims for the clinician.

1. To assess and document anatomical changes

2. To determine the cause of the SM and the full extent of the disease

3. Eliminate other potential causes of the clinical presentation and neurological localisation, for example, intervertebral disc disease as an alternative explanation for spinal pain

4. Assess whether the image findings are consistent with the neurological localisation and severity

5. To determine whether other diagnostic modalities are required – for example, a CT to characterise bony abnormalities that may need planning for surgical stabilisation 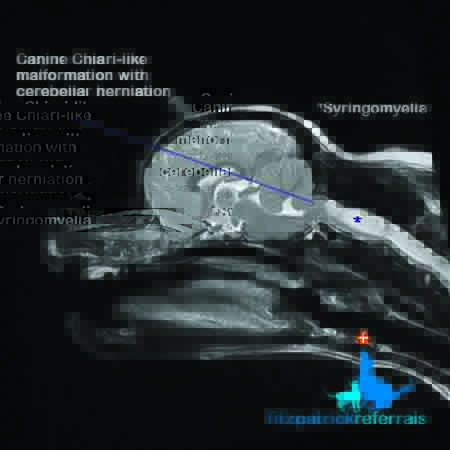 In order to assess the possibility or extent of CM and SM, the MRI protocol should be appropriate and should establish the longitudinal and transverse extent of the syrinx. If the cause of CSF channel disruption is not revealed by MRI then other imaging techniques may be appropriate.

What do the specialists suggest?

Given that MRI is the diagnostic modality of choice, it is recommended that any referring vet who is in doubt or in need of access to facilities, refers to a veterinary neurologist. However, it is not just about obtaining an MRI and we definitely recommend a consultation with a neurologist BEFORE the MRI because the MRI protocol should be tailored for CM-P or SM-S and/or the dog’s clinical signs. It is suboptimal if the client spends valuable funds on imaging that proves to be of inferior diagnostic quality and/or is a very limited study.

Read our client page on Chiari-like malformation and syringomyelia