To mark Rare Disease Day on 29th February 2020, we spoke to Professor Nick Bacon, Clinical Director at the Fitzpatrick Referrals Oncology and Soft Tissue hospital in Guildford, about how he and his team approach the treatment of rare cancers, to help give reassurance, options and hope to families whose animals may be facing cancer.

Nick also shares the story of eight-year-old feline patient Rodney, who was diagnosed with malignant melanoma on his ear, which is rare in cats.

How as a hospital do you approach the treatment of rare cancers?

Nick: At Fitzpatrick Referrals Oncology and Soft Tissue, we have five specialist clinicians seeing cancer patients simultaneously, which can be up to 40 cancer patients a week, and that is a lot to keep on top of as a group.

We want to make sure that we’re learning from each other and treating each patient to the best of our abilities, so every Tuesday morning we hold Tumour Boards where all the cancer clinicians sit down with the residents and interns and go through every single cancer patient we’ve seen in the last seven days.

We bring up the case record, we look at the pathology and how the patient presented, and if need be we look at the CT or perhaps x-rays, so that collectively we can make sure that everybody in that room is happy with the plan and agrees that it’s the best direction for that patient. It also allows the clinician to ask colleagues what they would do or if there’s anything else they’re overlooking, because we’re only human and we’re looking to benefit from the experience of the rest of the team. Collectively there is probably the best part of a century’s worth of experience in that room which has to benefit the patient.

What does rare cancer mean to you?

Nick: Our cancer hospital is just coming up to seeing its 7000th patient, so we see a huge variety of cancers. When we think about rare cancers in veterinary medicine, a family vet may see a particular type of cancer once a year or less, but it’s possible that we see it once a month or more.

Therefore the truly rare cancers are ones that we may see once in our career or collectively we may have seen one or two cases ever. So when we talk about ‘rare’, having a lot of colleagues who’ve worked in oncology for a long time often makes the rare a bit more common. You combine that with Tumour Boards and it’s a win all-round.

Tell us about your feline cancer patient Rodney, who you recently treated and how you approached his case?

Nick: Rodney came to see us after his local vet diagnosed a melanoma in the left ear flap, called the pinna. His vet had never seen this before because it’s an uncommon tumour in cats and has a bad reputation in dogs for being really aggressive, so Rodney was referred to see our oncology team.

Our first step was to make sure the melanoma hadn’t spread, or ‘metastasised’, so we did a CT scan of Rodney’s ear which showed there was no obvious disease in the ear tissue, neck or lungs.

More importantly, we injected contrast or ‘dye’ into the scar on Rodney’s ear that the family vet had made at the initial first surgery, and we were able to follow the dye as it ran down a lymphatic vessel in his neck straight to a lymph node near his shoulder. This node was the prescapular lymph node and in Rodney’s case, it was his ‘sentinel’ lymph node, i.e. the first place the tumour would spread to. 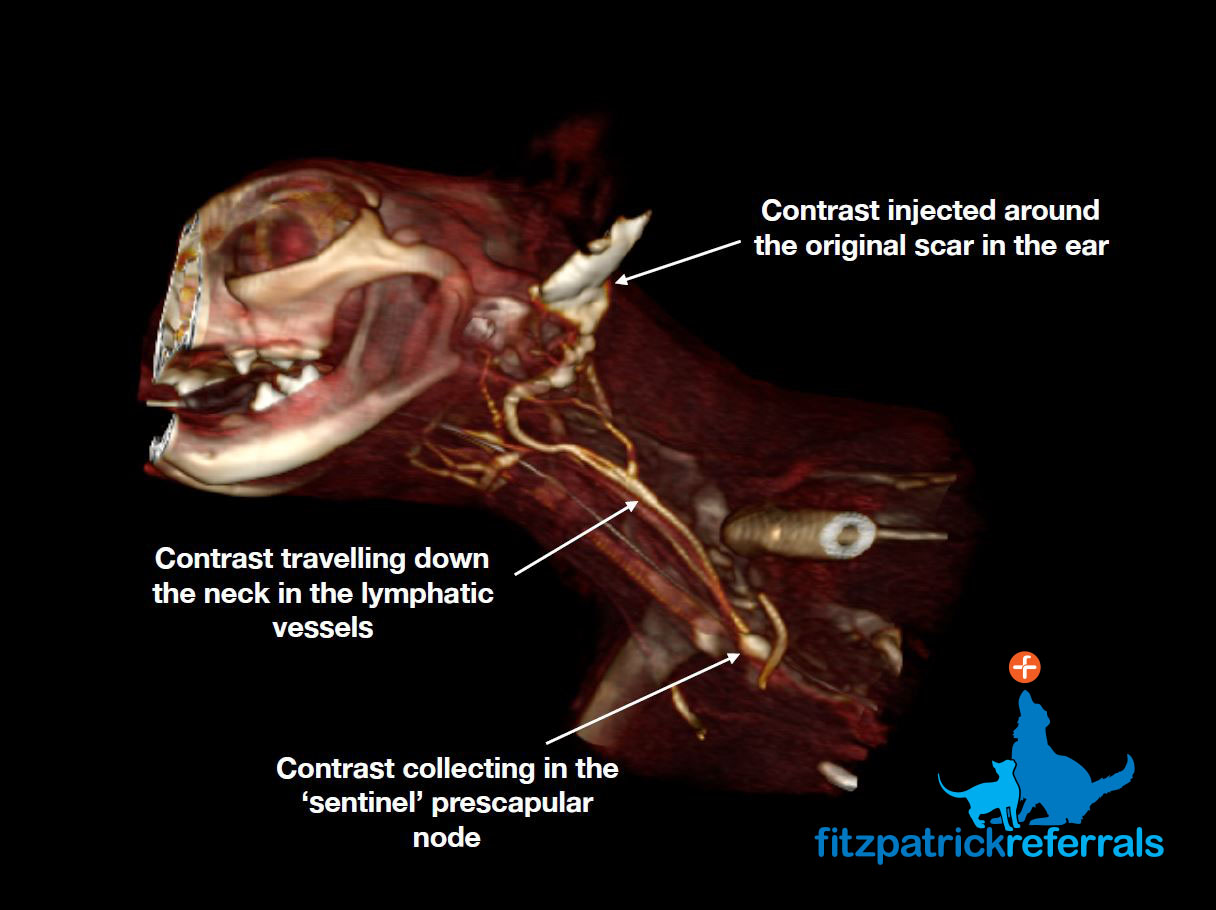 CT scan of feline patient Rodney showing the contrast travelling down from the scar site, to the sentinel lymph node.

This test is called lymphangiography and is commonly performed in human medicine to find out where a tumour would spread to first, so that we can concentrate our efforts on biopsying the correct lymph node. It is all part of personalised cancer care which we believe our patients benefit from. 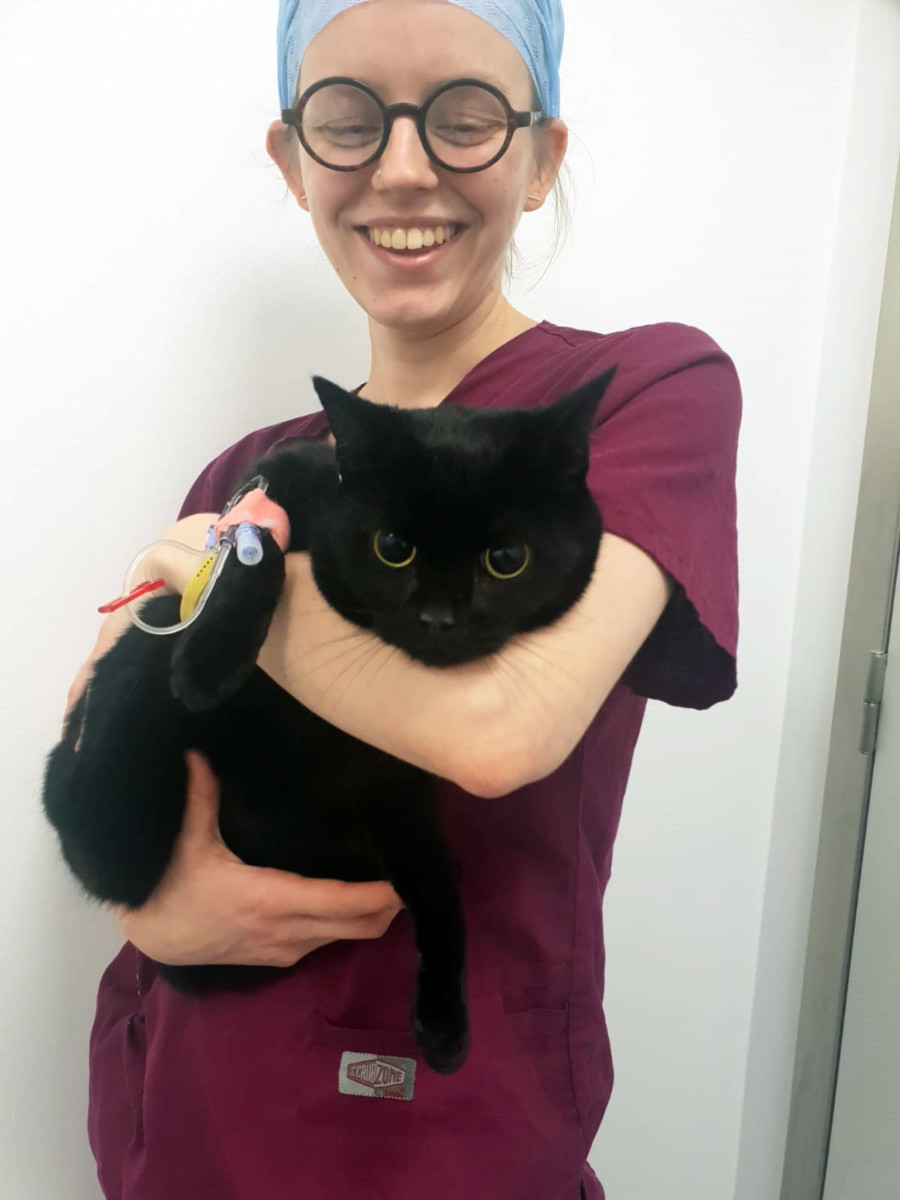 Rodney being comforted by Auxiliary Frankie

Rodney came back to see us a few days later for revision ear surgery where we resected the old scar on the pinna and I’m pleased to say there is now no cancer left in that area. We then removed the sentinel lymph node near the shoulder that we’d identified, meaning Rodney had a much smaller targeted surgery. I’m pleased to say there were no cancer cells in the node which is great news for Rodney, because we can now say to the best of our knowledge that he is cancer-free.

Following surgery, Rodney has returned home to his family, his surgical scars have healed and his family report that he’s back to his happy, normal self. As there is no evidence that we need other drugs for Rodney after surgery, he has been officially discharged.