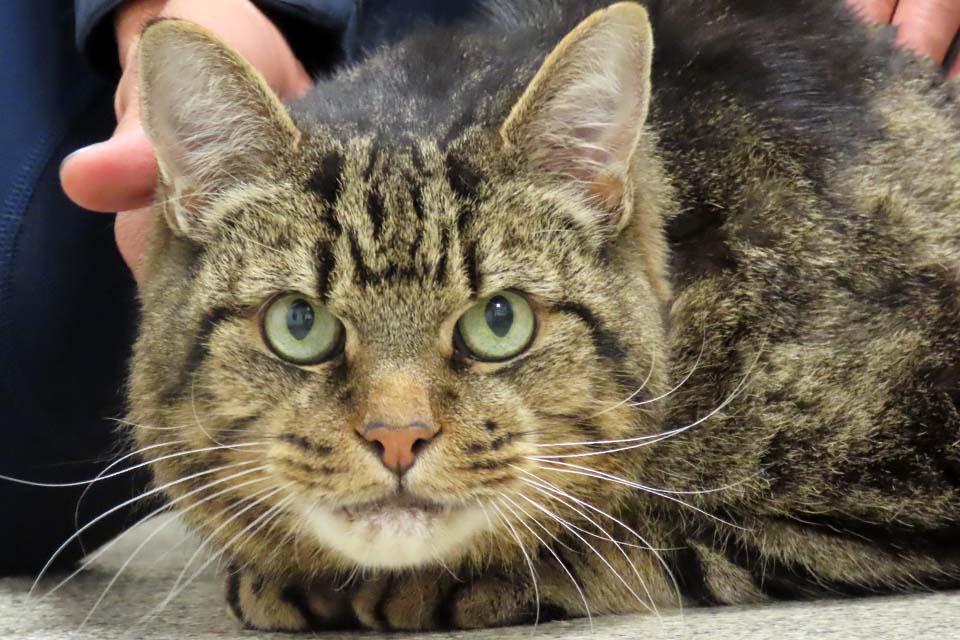 Meet the delightful Doug, a 10-year-old Domestic Short Hair cat who was referred to our specialist neurology team after a five-month history of spinal pain, progressed to paralysis.

Doug was a rescue cat I got from the RSPCA in 2011. He was always an exceptionally shy cat and loved being outdoors. His nervous disposition I think came from some trauma prior to his life with us and as a result he was always a little ‘comfort’ eater.

He was quite a big cat and despite numerous attempts to get his weight down, he still managed to find wildlife to compliment his cat food at home!

In March 2021 we noticed his back legs getting more and more weak and having him seen by our local vet, we put it down to arthritis.

By August 2021, his family returned from a holiday to sadly find him unable to walk and his legs almost paralysed.

Doug was admitted under the care of Chief of Neurology Professor Clare Rusbridge to Fitzpatrick Referrals Orthopaedics and Neurology in Eashing, Surrey.

He underwent a clinical examination and advanced diagnostic imaging to investigate what was causing his deteriorating condition.

An MRI scan was performed due to Doug’s clinical signs which included dragging his back end, delayed reaction in the pelvic limbs and pain in the lumbar area. These signs pointed to a neurological pathology and after a neurological examination, Chief of Neurology Professor Clare Rusbridge localised the problem to the thoraco-lumbar area.

MRI can provide excellent differentiation between soft tissue structures and is, therefore, the best imaging modality to visualise the spinal cord, discs and nerves. 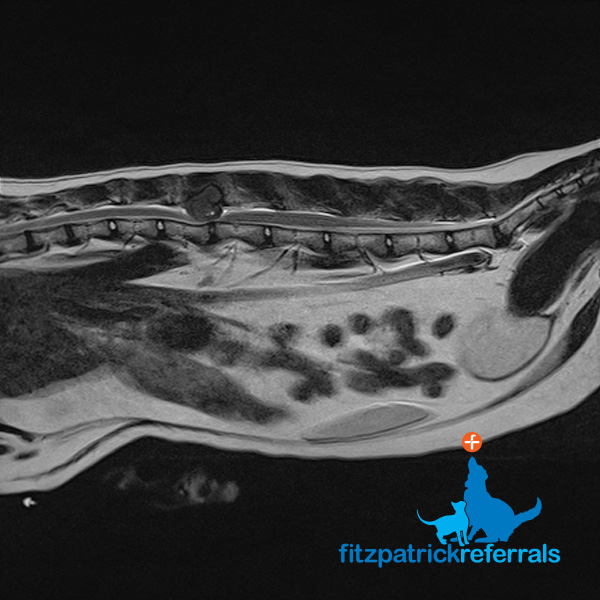 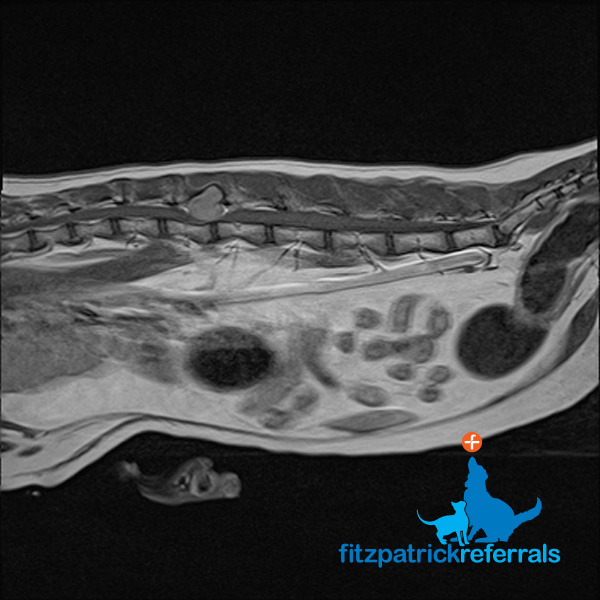 Doug’s MRI scan showed a tumour (suspected sarcoma) at the level of the L2 vertebral body, the tumour looked bony in origin and was severely compressing the spinal cord. 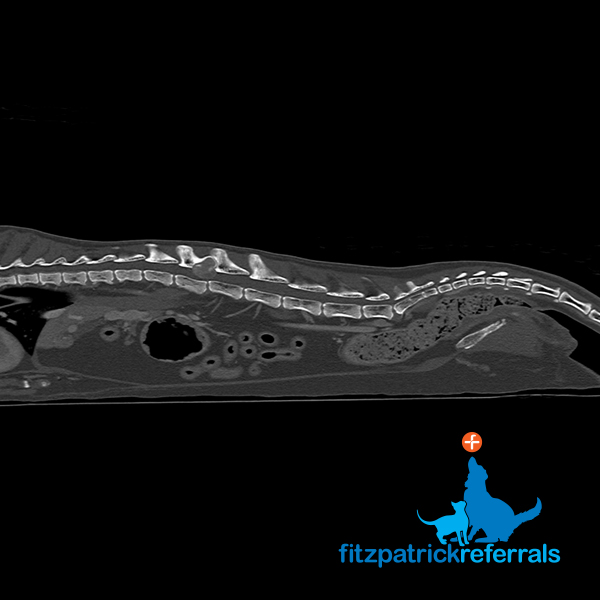 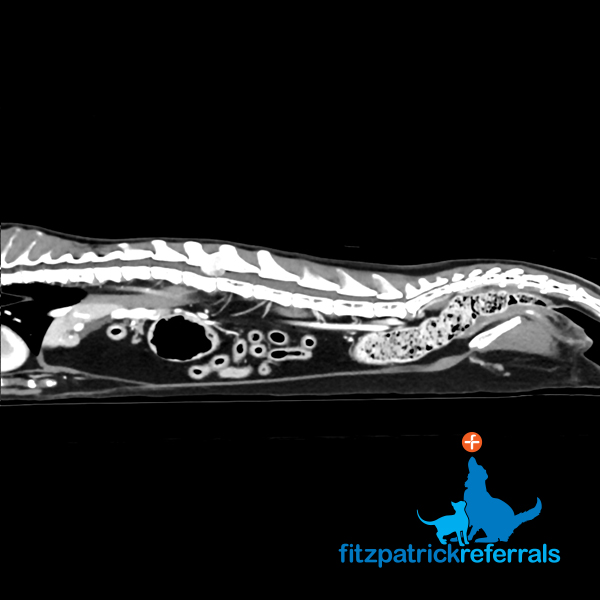 A CT body scan was performed immediately after the MRI to stage the tumour and ascertain if there was any cancerous spread. As opposed to an MRI scan which mainly focuses on one body area, CT scans can acquire extensive data from multiple body parts in a short amount of time and are sensitive to most major organs.

Fortunately, there was no evidence of secondary tumours on the CT and surgical removal of the tumour was offered to Doug’s family.

A 15mm tumour in his spinal column and we were offered the choice to either operate or put him to sleep. We made the decision for Fitzpatrick Referrals to operate and to work with him on a full recovery so that Doug could have the best care and chance of regaining the use of his legs.

Doug’s CT scan also doubled up as a surgical planning tool, as it provided sub millimetric detailed images of the bony anatomy. 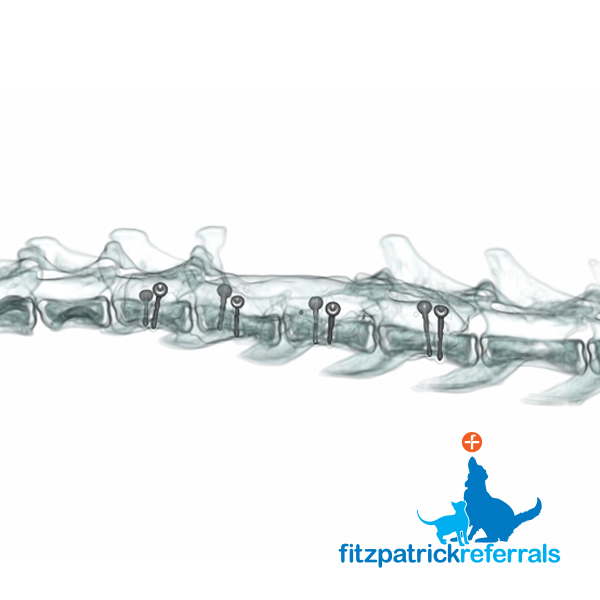 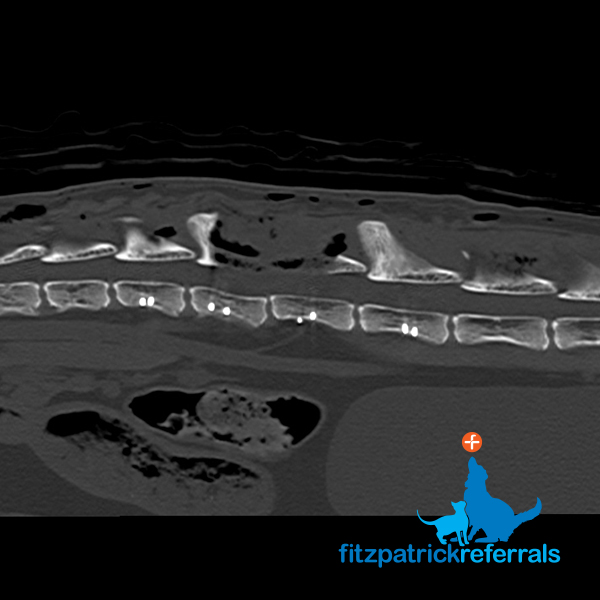 Professor Clare Rusbridge removed the tumour and Neurology Registrar Dr Joana Tabanez stabilised the spine with eight 1.5mm titanium screws placed on both sides of the vertebral body of L1, L2, L3 and L4 before securing with bone cement, as the tumour had destroyed the joints between the vertebrae. 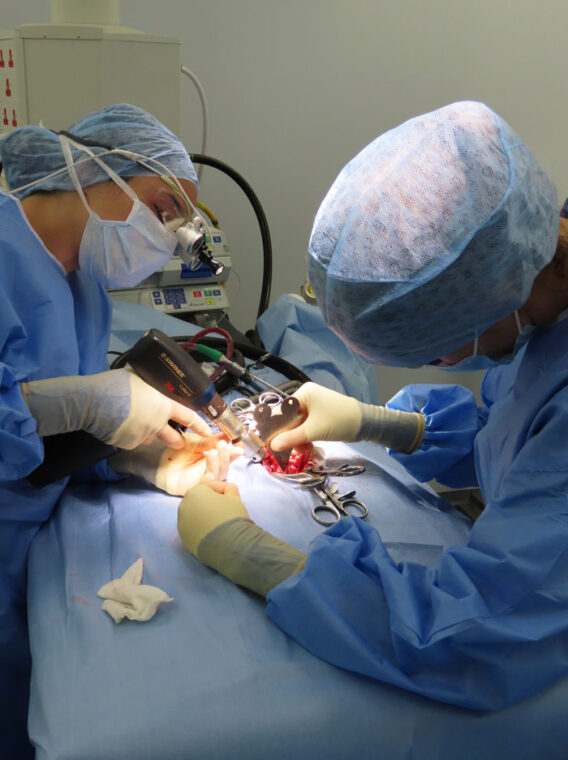 Specialist Anaesthetist Dr Daisy Norgate and the nursing team were integral for anaesthesia and analgesia. Following surgery, Doug’s tumour was sent away to pathology for testing.

Doug soon returned home and was a good patient resting and purring in a small annex room, combined with some outdoor crate rest so he could watch his much-loved wildlife from the garden. 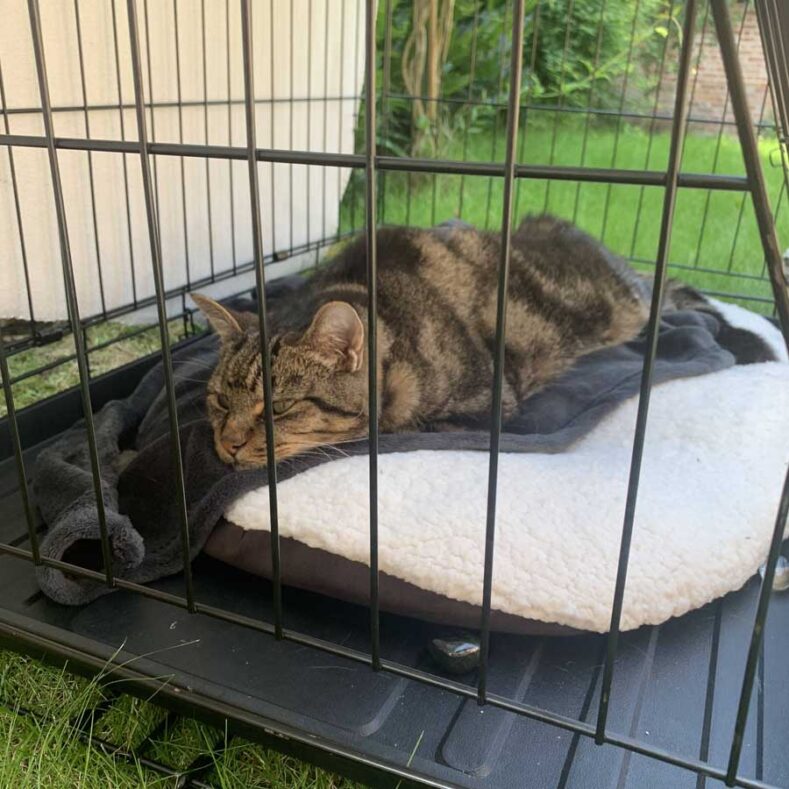 Doug resting in his crate at home in the garden.

Three weeks later he came back to the practice for a check-up with Clare, to review his progress. 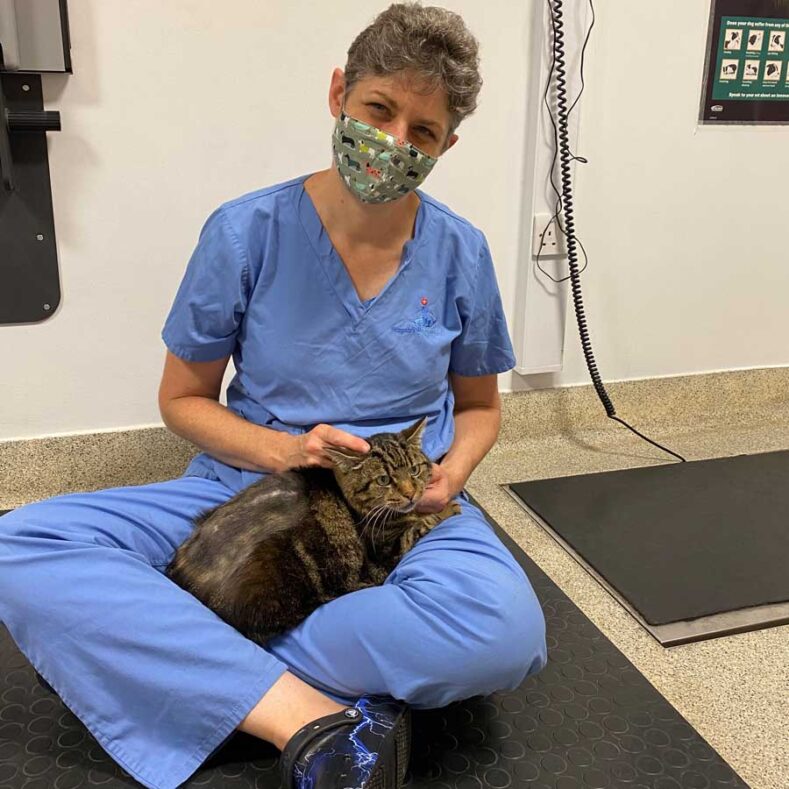 Chief of Neurology Professor Clare Rusbridge with Doug at his 3-week check-up. 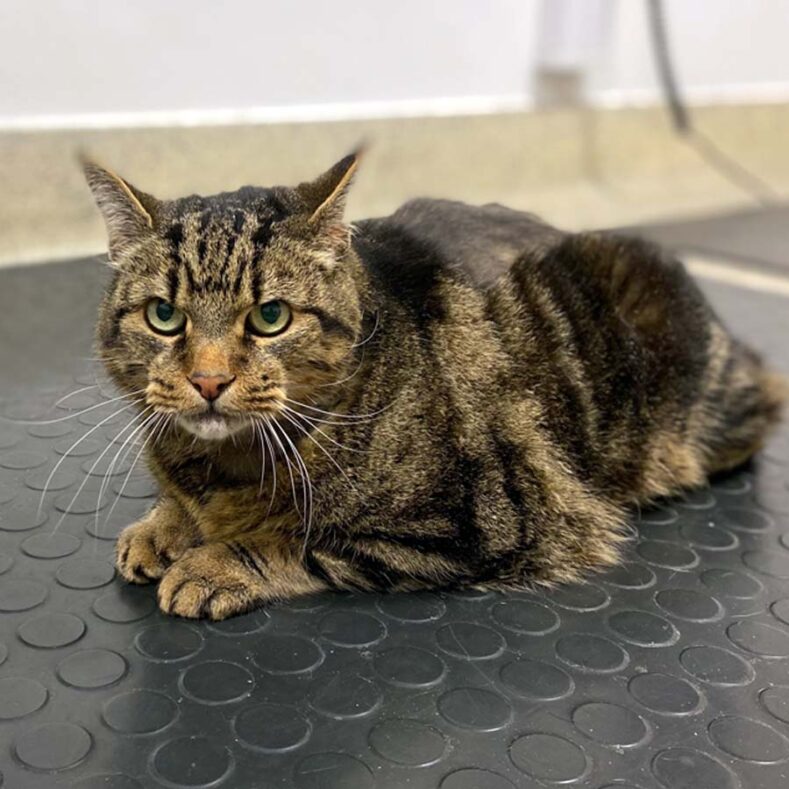 Our conclusion is that Doug’s tumour was a very rare, benign, giant cell tumour of the bone. It was behaving in a benign way, not very active and with not many dividing cells and was removed with ‘clear margins’ (clear of tumour tissue), so we’re cautiously optimistic that we have removed all of the tumour.”

Whilst Doug was not particularly happy to be back at the vets and didn’t wish to show how well he is now walking, there were positive signs suggesting he is no longer in pain. Clare noticed that in comparison to his first visit, he has now been grooming and caring for himself, which suggests that he’s comfortably able to twist round despite the fixation and bone cement.

Doug’s mum sent us this video to show how well he was really doing, 3 weeks later compared with his condition before surgery. 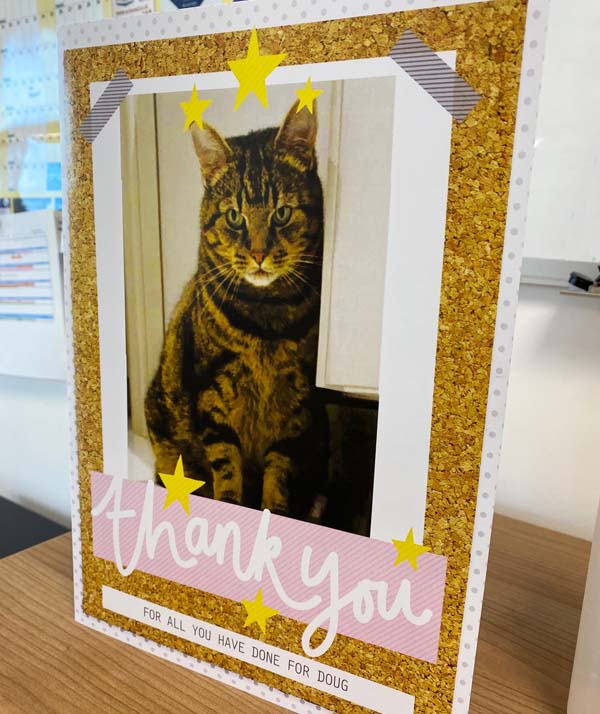 A lovely thank you from Doug’s family.

Thank you for everything you did for Doug in his back operation and beyond. 6 weeks on, he is now fully into trotting despite the 8 titanium pins!

We are so grateful to you all for your surgical magic and care for Doug.

Read more about Doug’s imaging, as featured in our World Radiography Day blog