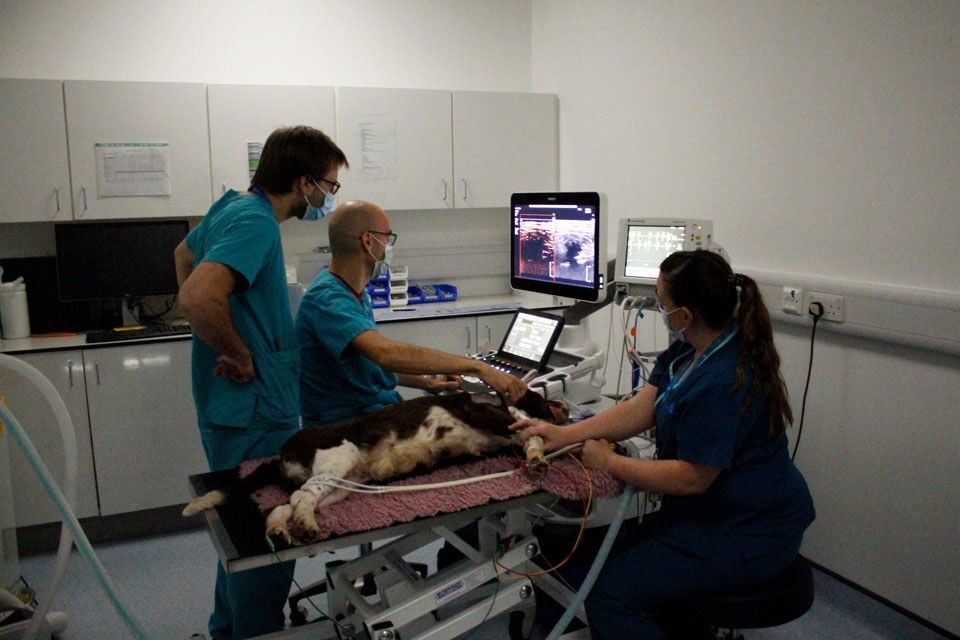 Only a few places in Europe are able to routinely perform this minimally-invasive test as part of their cancer management.

Many cancers spread to lymph nodes first, before progressing to more distant sites. Evidence is growing that removing a metastatic lymph node may even help to cure some cancers if they have not spread further.

In many tumours, especially those in the skin, it is not always obvious which lymph node drains the cancer (the ‘sentinel’ node), raising the possibility that the incorrect node is sampled or worse, removed.

Ultrasound image of a right axillary lymph node confirmed to be sentinel (draining), in a dog with a subcutaneous mast cell tumour on the right flank. Image obtained with our newly acquired contrast mode (left) versus image obtained with a normal ultrasound mode (right).

Sentinel lymph node mapping means the correct lymph node is identified for that tumour, at that time, in that patient. The technique consists of injecting a benign contrast agent into the tissues around the tumour which travels in the lymph system to only the draining lymph node(s) allowing them to be identified by ultrasound. This confirms which lymph nodes should be investigated more closely. Non-draining lymph nodes appear unaffected on ultrasound and can be ignored.

The technique of sentinel lymph node mapping is particularly important in human breast cancer and melanoma of the skin, traditionally using a radioactive agent to map the lymph nodes (scintigraphy).

This technique however is rarely used in pets because of the cost and safety issues involved. In the past few years, CT scans have become more widely used in veterinary oncology to map the lymph nodes in dogs (lymphangiography) to give a precise 3D reconstruction, but typically requires a general anaesthetic, it is relatively expensive and may fail to identify a lymph node in up to 40% of cases. 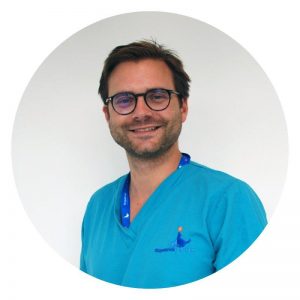 A number of studies over the last decade have showed that the use of ultrasound instead of scintigraphy for sentinel lymph node mapping showed great promise for veterinary cancer patients.

Fitzpatrick Referrals Senior Clinician in Medical Oncology, Quentin Fournier, recently demonstrated that this technique was also valuable for the staging of mast cell tumours in dogs[1]. He says:

It is so exciting to be working at the forefront of progress in this area, and to be able to offer our patients the newest techniques.

Mast cell tumours are the most common skin tumours in dogs and tend to spread to the lymph nodes first, before spreading to more distant sites such as the liver and spleen. Samples from the liver and spleen can be taken with the help of ultrasound, so using this modality for lymph node mapping at the same time is particularly convenient for the animals and their families.

Over the last few months, over thirty patients at Fitzpatrick Referrals have already benefited from this new technique, with a success rate of identifying the sentinel lymph node in over 90% of cases.

Fitzpatrick Referrals Oncology and Soft Tissue welcomes primary care vets to contact us to discuss their cases and if interested to follow their patients through their referral and treatment. 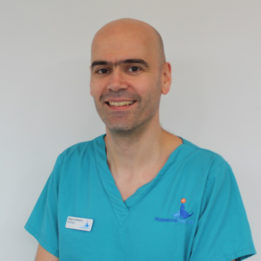